Despite a recent lack of evidence, I do still knit. Until we moved two weeks ago, I knit quite a lot this year, and have a big pile of finished projects to prove it. Since we moved, I have picked up my needles a few times, but I'm not really motivated by any of my current projects. Here is a quick run-down of the odd socks I have turned into pairs so far this year. I'll post the new pairs later this month. 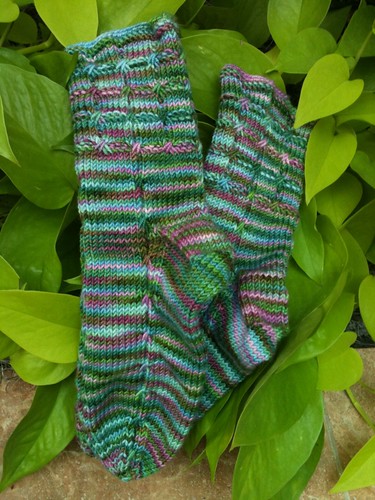 Pattern: Slip Jig by IrishGirlieKnits, March 2010 Rockin Sock Club
Yarn: Socks that Rock Mediumweight in Wild Irish Girlie
Needles: US 2 / 2.75 mm DPNs
Time: December 13, 2010 to January 13, 2011 (biggish yarn, small socks)
Comments: I sent the first sock as part of her Christmas gift, and learned that it was too small. I quickly knit up a bigger pair that fit her perfectly.

Pink Posy Socks for me

Pattern: Sheri's Posies from Socks from the Toe Up
Yarn: STR Lightweight mill end in an impossible to photograph bright pink.
Notions: 2.5 mm DPNs
Time: I started these at Wendy's book signing party in April 2009. I finished them in March 24, 2011.
Comments: I used my standard toe-up gusset modification (two additional pairs of increases for a longer heel flap) to get a pair of bright.pink.socks that I love.

Pattern: Knetted by Cat Bordhi. This was the September 2009 Rockin Sock Club kit.
Yarn: STR mediumweight
Notions: US 2 / 2.75 mm DPNs
Time: December 16, 2009 to April 16, 2011
Comments: I knit the first sock and was unhappy with the fit so the pair stayed unfinished for a long time. The short cuff and funky architecture did not work for my feet. I borrowed a copy of Cat's book from a friend, since mine went on walkabout, to figure out some modifications. The second sock has a longer cuff and more increases so it fits in the gusset. I ripped back the first sock to the start of the increases and re-knit a longer leg and the modified gusset and heel. I'm not sure if I'll knit another pair of socks with this method, but I'm happy with this pair.

I just realized that all three of these pairs were knit from Socks That Rock. It is a favorite yarn, I should knit more socks from my extensive stash. I absolutely should not buy any more while I'm at Sock Summit in a couple of weeks.

Yes, I went to sock camp again. It was as fabulous as other bloggers have already reported. My report is a bit delinquent because the time change flying east affected more than it usually does. I blame the week of tremendous fun, the 5:10 am departure from Seattle, and 12 hours of travel time to get home last Sunday. I didn't pay for my plane tickets to camp which meant I got the flight times and routing that no sane traveler would choose: Seattle to Pittsburgh (with a stop in Phoenix that the booking agent did not mention), 2 hour layover, then Pittsburgh to DC. I tried to rebook direct to DC from Phoenix, and then I tried to grab a seat on an earlier flight to DC in Pittsburgh, but the travel gods did not cooperate. 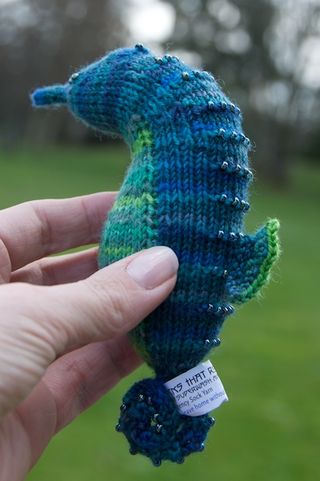 For my sea creature homework, I knit a seahorse whose only story was that it took me 4 or 5 tries to get him right. But I finally did, and I think he's pretty cute. Better yet, he came out exactly as I pictured him in my head before I started. I need to turn my sparse notes into an actual pattern so I can knit a whole family of seahorses for my nieces and nephews. 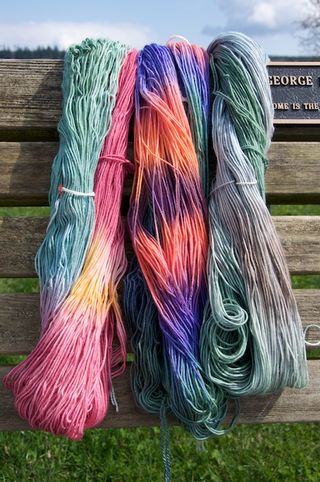 My favorite class of the week was Come Dye with Me taught by Tina. The group discussion of what colors make us happy and which ones make us uncomfortable was enlightening; my chance to think about and reflect on color had me wishing I could paint the walls in my home and reflecting on the colors in my wardrobe. The chance to apply color to yarn with Tina, Debra, and Guido supervising made my week. My happy (Pink Hibiscus), uncomfortable (Bird of Paradise), and another happy (Driftwood on the Beach) skeins of STR Mediumweight are above. Below are the vacation photographs that inspired them (click for big).

That's all I have for now. Check back later this week for more about camp and my journey around the Olympic Peninsula before camp. 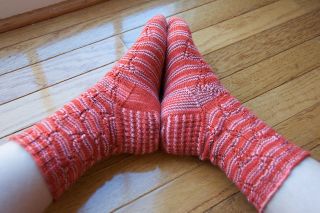 Serendipity Socks
Pattern: Serendipity by Adrienne Fong. This is the first kit from the 2008 Rockin' Sock Club. The pattern will be available to the public later this month.
Size: Mine (US Women's 6.5 D)
Yarn: Blue Moon's Socks That Rock Lightweight in Dragon Dance
Notions: 2.5 mm Brittany DPNs
Time: May 28 to December 21, 2008
Comments: The only 2008 sock club kit I started; at least I finished it. I'm a little surprised at how much I came to love the orange yarn. I modified the pattern knitting a heel flap rather than a short row heel to better fit my high instep.

Lenore
Pattern: Lenore from October 2007 Blue Moon Rockin Sock Club
Size: Mine (US Women's 6.5 D)
Yarn: Socks That Rock Lightweight in Lenore
Notions: 2.5 mm Brittany DPNs
Time: November 11, 2007 to May 25, 2008
Comments: Somewhere between when I finished these socks in May and when I found them for their photo session and first wearing this winter a cat (or a m*th, but my money is on a cat) used one of these socks for playtime. I thought the repairs could be accomplished by grafting the hole in the heel and re-knitting the last few rows of lace and the toe. As I started to pick up the stitches after ripping out the toe, I found many spots with one frayed ply—spots just waiting to turn into new holes. By the time I was into solid yarn, I had frogged almost all the way back to the end of the gusset decreases. It's a good thing that the cats are cute and snuggly, I really enjoyed knitting these socks, and I had plenty of yarn left over. Right now, the whole sock is in my sock drawer and the other one is in the knitting bag waiting for me to recover from the trauma enough to finish it again.

My Socktober was a success. My personal goal was to finish four unfinished pairs. I finished three of them and made significant progress on the fourth odd sock. On the last day of vacation (October 1) I finished The Solstice Slip and wore them home on the long flight from Hawai'i. On my trip to California (October 7) I finished the striped Sockotta pair. On the trip to Bermuda (so technically in November, but I'm still counting last weekend as October for these purposes) I knit the last two rows of the blue cotton Widdershins. I got to the heel on Hedgerow and misplaced the pattern printout which made travel knitting on that sock a challenge since the heel construction is a little bit unusual.

Pattern: Solstice Slip, the June Rockin Sock Club kit.
Yarn: Socks That Rock Lightweight in Firebird.
Notions: 2.5 mm Brittany toothpicks.
Time: Sometime in July to October 1, 2007
Mods: I used the stitch count for the second size, but knit to 9 or 10 stitches/inch instead of 8 for a lovely snug pair of socks.

Pattern: Widdershins.
Yarn: Jawoll Cotton.
Notions: 2.5 mm Brittany toothpicks.
Time: Sometime in July 2006 to November 1, 2007
Mods: Again, I knit to a much firmer gauge than the pattern called for and increased the stitch count to 64 stitches. I adjusted the gusset and heel counts a little to end up with a pair of socks that fit me pretty well after much trial and error. Now that I've tried it once, I doubt I will knit another pair of toe up socks with a gusset and flap construction. I love the fit of the modified short row heel and mini-gusset in the Solstice Slips, so I will probably use that in my future toe up endeavors.

A beach picture for Claudia 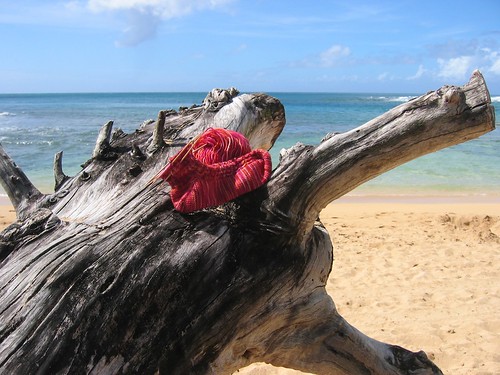 Yesterday, I went to the beach. D stayed at the resort and worked on a court filling due on Monday. I played in the surf, took some pictures, and knit a few rows on Solstice Slip. I gave up on the knitting when the rain showers became more frequent than the sunny spells. There are lots more beach pictures over at Flickr in the Kauai 2007 Set.

I will not be knitting the Rockin Sock Club Monsoon yarn in the beautiful Inside Out! pattern. I want to desperately, but the pattern as written at 8 stitches per inch has about an inch of positive ease on my US size 6.5 feet. There is no way my hands will be able to take knitting the Mediumweight yarn at 8.5 stitches per inch or tighter to make socks that would fit--and be stiff as boards on my feet. Even knitting mediumweight on 1s to get 8 stitches per inch is something of a struggle for me. I tried on the toe plus an inch or two of foot last night and the ribbing did not pull out at all; it flopped around my foot. I'd show a photo or the oversized sock, but I've already ripped it out in an attempt to figure out a way to knit the foot on fewer stitches. If my addled brain can take it tonight, I might rewrite the pattern for fewer stitches. However, I'm more likely to knit the Monsoon yarn in another pattern at a gauge more comfortable for my hands and knit the Inside Out! socks as written from a thinner (like the first Lucy sock club yarn on teeny tiny needles. This knitting thing is, after all, supposed to be fun and relaxing—not a major struggle.

Now to find a sock pattern happy at 7.5 to 8 stitches per inch.