If you have to move, I recommend moving a few blocks less than a year after a cross country move. We purged a lot of stuff when we moved to California last year. We've been slowly purging more stuff and trying not to accumulate new stuff over the past year. Happily (perhaps), we had not unpacked everything we moved last December because we planned to buy a house as soon as we found the right one.

The beauty of the short short move is that we could move quite a bit ourselves. Rather than wasting packing material and money, we spent a weekend carefully transporting bins of fragile things (like the china) by car. As soon as we moved a load, we put nearly everything in it away. Then we had movers transport the furniture, never upacked boxes, and 65 or so boxes of books. Full disclosure: as was the case with most of our recent moves, I managed to be out of town on the day the movers arrived to pack and load our household onto a truck. I am married to a saint and champion mover, and I owe him a lot for covering all these moves solo. 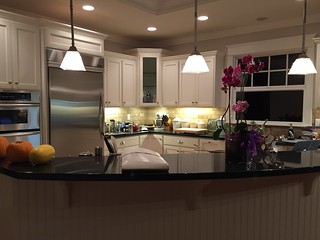 As a result of our load by load moving, the kitchen is fully functional. In fact, we've already had a party that confirmed that this house is perfect for entertaining the big groups we love to host. 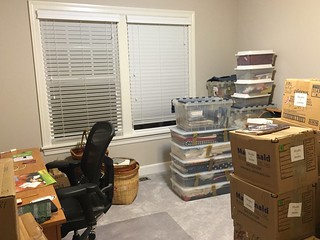 My studio/office/wool room still needs a lot of work. I need some bookshelves and another work surface for the sewing machines. Until the shelves arrive, there's not much I can do to unpack the boxes and clear the floor. Until I have a work surface, the sewing machines will stay in their cases and my plans to dust off my rusty clothing construction skills will stay plans.

You are indeed married to a saint.