Wow. Project monogamy works. I signed up for a lacy stole swap last winter. The deadline for this swap was the end of September. Late August arrived, and I realized that I had to get knitting. My plans to knit from handspun went out the window. I picked a pattern that looked straightforward and doable in a month and went stash diving. In one week, I knit half of the stole.

I finished knitting on time and received notice that the swap deadline has been extended to January. Sigh. I finally blocked my stole on Sunday and took a few pictures Monday morning.

I enjoyed knitting this stole and may knit it again for myself. The garter stitch lace makes for relatively easy lace knitting, even if the middle section was a little dull after the tenth of eighteen repeats. For example, all the decrease in the lace are k2tog; the mohair makes it impossible to see if decreases are left or right leaning. The mohair blend hides many knitting sins and dropped stitches stay put. Thank goodness for the easy pattern since the mohair makes frogging nearly impossible. The subtle shading in the yarn works well with the not-intricate lace patterns. I think this pattern would work well in many multi-colored lace yarns. 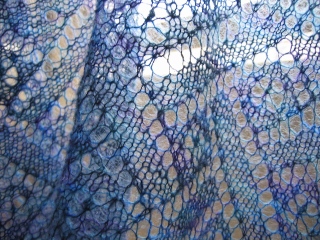 Swap Stole
Pattern: Lacy Lattice Stole from Fiddlesticks Knitting
Yarn: Crystal Palace Kid Merino in color 8902. I purchased the yarn 3 years ago at Woolcott & Co. in Cambridge. I used just shy of 3 balls—about 650 yards.
Notions: 3.5 mm needles
Time:August 22 to September 24, 2008 for the knitting. As usual, it took me another 3 weeks to pull out the blocking wires and pins to actually finish this project.
Comments: I probably knit to a tighter gauge than the pattern specifies; it is a lace stole, so I never actually measured gauge. My finished stole blocked to about 18 x 66 inches. I probably could have pulled it out a little bit more, but I doubt it would stretch to 22.5 inches wide.

I am making an attempt at lace with mohair (BMFA Silkmo in Thraven) and it's driving me nuts...It's interesting that you noted that the direction of the decreases can't be seen in the mohair...I think I'll stop aggravating myself with SSKs :) Thanks!
p.s. beautiful work!

That is just gorgeous. And your blocking prowess is impressive!